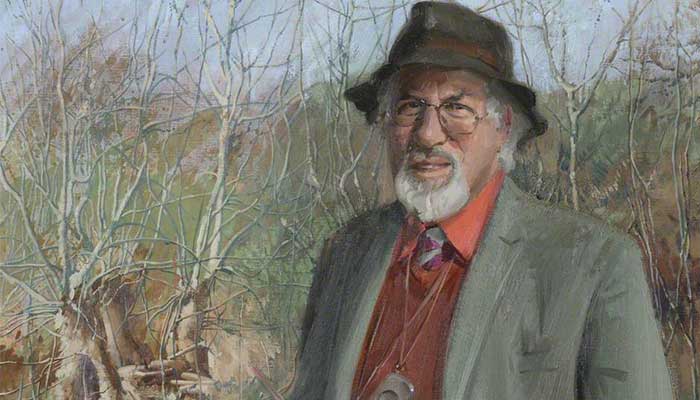 The late Oliver Rackham, OBE, was a leading historian and ecologist with an unrivalled knowledge of British historic woodland. He was also a pioneer – linking ecological research with that of archaeology for the first time through ground-breaking work in the Mediterranean Basin.

Formerly Master of Corpus Christi College, where he spent over fifty years of his life, Rackham bequeathed his papers to the college, where they are now housed in the archive.

Now as part of a vital preservation and access project the Oliver Rackham collection, held by Corpus Christi College archives and containing a wealth of his notebooks and 35mm slides, is being digitised and published online.

The goals of the first stage of the Rackham digitisation project were:

Significance and make-up of the collection

For Rackham the work of observing the landscape and writing about his findings, remained a continuing and central preoccupation throughout his life. The red notebooks in which he recorded his observations, and which form an unbroken series from his youth to his death, reflect that. He also kept a parallel series of blue, location-specific notebooks, which include in depth ecological notes about areas of Crete, Greece, Cyprus and other Mediterranean islands.

Although Oliver Rackham published several important, and award-winning, books during his career, it is in the notebooks that the raw data on which he drew for his books can be found, and the notebooks contain much information that remained unpublished and thus are of great interest and are frequently in demand for consultation by scholars and conservation workers. Likewise the slide collection contains myriad images documenting the areas he studied and the woodland there.

One of the distinctive features of Rackham’s work was its interdisciplinary nature, and particularly the way it related scientific observation to historic and cultural context, revealing the nature of man’s interaction with his surroundings, for example through practices like coppicing, a traditional form of woodland management. Rackham’s notes and observations on these practices remain of interest not just to scholars but to practitioners working in woodland management or conservation. 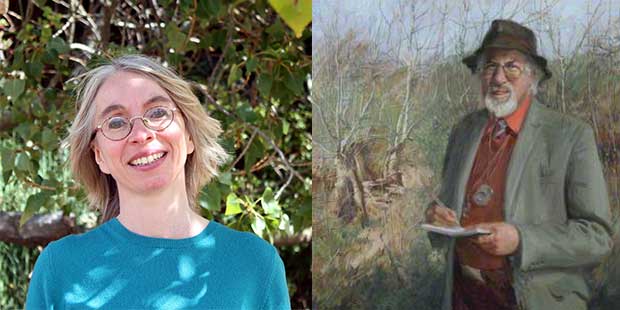 Selecting what to Digitise

Facing such a large collection, one key decision during the initial phase of the project was selecting which parts of the archive to digitise first. Dr Lucy Hughes, Archivist at Corpus Christi College, explains:

“We began by prioritising the notebooks describing Hayley Wood, near Cambridge, because this location had a special importance for Oliver Rackham. Many of his friends and colleagues visited it with him and they expressed a particular interest in seeing these notes. Amongst the slides selected for digitisation were a high proportion showing Crete, and the landscape there. This was a location Rackham visited a lot with an archaeologist colleague, co-author of a study of Crete with him. More of these remain to be done.”

Dr Hughes continues:
“I work part-time only, and do not have the time at my disposal to undertake the scanning myself. The practicalities of finding a suitable place to set up the scanning equipment and oversee it properly in-house were also too complicated and therefore outsourcing seemed more efficient. TownsWeb have a good reputation and a proven track-record of successfully undertaking similar projects, and were also cost-effective.”

Our technicians digitised the two notebook series’ to produce a master set of Tiff image files captured at 300ppi, as well as an access set of surrogate Jpeg images at reduced file sizes – suitable for making available online.

For the red Rackham notebooks, folders were named according to the volume number of each book and individual page images were sequentially numbered.

Image below: Taken from Bradfield Wood 3 notebook. Bradfield Wood in Suffolk was one of the ancient woodlands that Rackham visited repeatedly over many years, there are 22 blue notebooks recording his findings in the online collection. 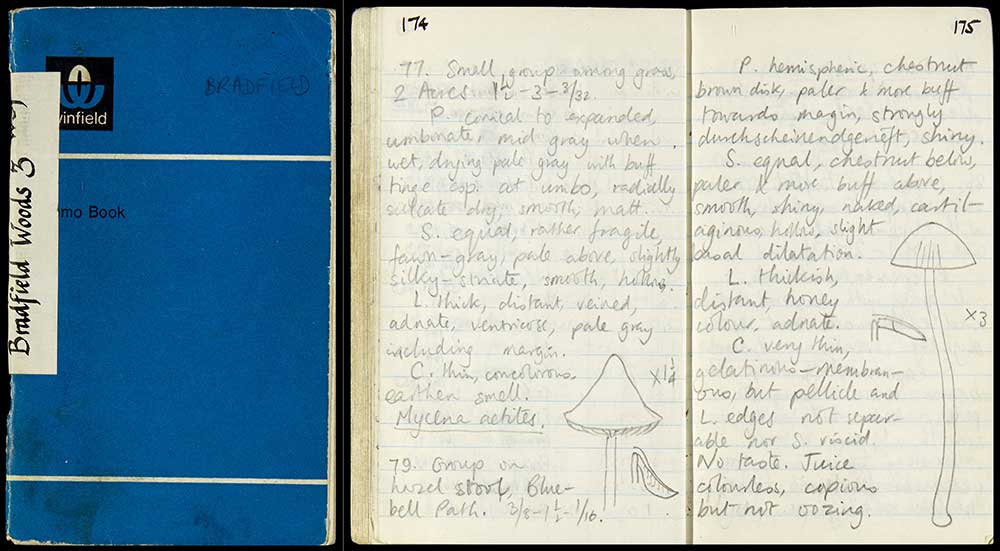 Whilst for the blue notebook collection, top level folders were named according to each national location represented within the notebooks, with sub-folders named according to the regions and locales from those locations, and individual images numbered sequentially.

The 2000 35mm slides that have been digitised so far were captured by our technicians at 2400ppi resolution and (as with the notebook series) both a high resolution master Tiff image set and surrogate Jpeg image set were produced.

The digital images were organised to reflect the structure and metadata of the physical slide collection, using each box and location reference to name folders and sub-folders.

Image below: Slide from the Rackham Hayley Wood collection. This pond is located in Hayley Wood, Cambridgeshire, which was an ancient woodland monitored closely by Rackham and local conservation workers. The wood is famous for its oxlips. 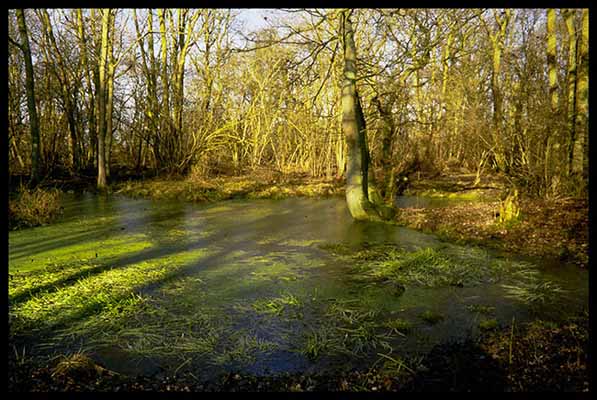 Image below:This grass snake was photographed by Oliver Rackham in Hayley Wood. Observations of wildlife, like this one, occur frequently, interspersed through the notebook and slide collections. 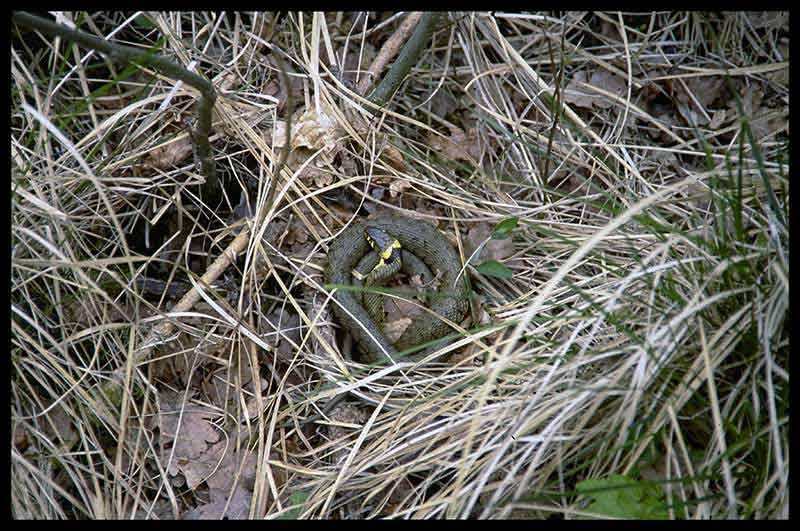 Impact of the digitisation project so far

The digitised notebooks have been uploaded to the Cambridge Digital Library website as part of a dedicated online Oliver Rackham Archive collection, where they are freely available to view by researchers and the public.

Explaining the impact further Dr Hughes said:
“In the period since launching online in August 2016, up until 24 May 2017, there were 28,953 page views of the notebooks on the Cambridge Digital Library website. This is a very high figure and indicates significant interest from the scholarly community and beyond.”

“This project has enabled us to raise awareness of the collection and demonstrate its importance and interest to potential sponsors. In the case of the slides, there is a strong preservation argument about the benefits of digitisation: the slides will deteriorate over time and there is a need to capture these images in a stable format before deterioration advances too far.”

As this phase of the project ends, Dr Lucy Hughes and the Corpus Christi College Archive are working to raise funds to carry out vital further digitisation of their materials:
“We plan to digitise the rest of the slide collection (a further 12,000 slides, a rough estimate). For preservation reasons, this is now a priority, but digitisation of the notebooks will continue alongside, led by user-demand.”

The treasure trove of Rackham’s notebooks and photograph collection can be viewed now through the Rackham online exhibit on the University of Cambridge Digital Library portal. Corpus Christi College Archive are currently seeking donations to fund digitising the next batch of materials from the Rackham archive. If you would like to find out more about donating and supporting this digitisation please contact Dr Lucy Hughes.

USE OUR ONLINE
QUOTE CALCULATOR

Receive the latest digitisation news & advice, straight to your inbox

Keep up to date

Sign up to our newsletter and be the first to know about the latest cultural heritage news and updates.

Sign up to our newsletter and be the first to know about our next funding opportunity, plus the latest cultural heritage news and updates.